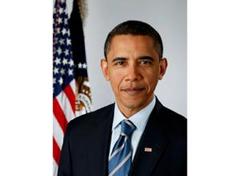 He’s cool, he’s down with the kids, he’s a firm Apple aficionado (or was that Zune?) and even online games have been crafted with the President-elect as the main attraction. He is quite possibly going to be the coolest President to have graced the White House…EVER.

As every President knows, the Presidential portrait is an important aspect of their Presidential supremacy, but what separates the 44th President of the United States from his predecessors, is a digital camera – or more specifically, the Canon EOS 5D Mark II, making him the first President to have his official picture taken with a digital camera.

Barack Obama’s inauguration just happens to be amidst a time when we’re at our most technologically advanced. So while ex-President Bush was portrayed in a painting (and no doubt posed for hours), Obama was probably in and out in a matter of minutes with a few simple snaps.

Achieving this picture took great dexterity and precision – I’m talking no flash, a 105mm lens stopped to f/10 at a 1/125 exposure, with an ISO of 100. The result – a great Presidential portrait.

Like this? Read this: Help Barack Obama strike back with this geeky T-Shirt