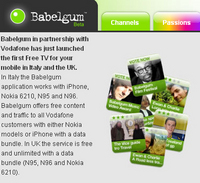 Vodafone has just announced the details of a free mobile TV service, for people who have signed their lives away on a contract. The downloadable services goes by the name Babelgum, which is basically an unintentional portmanteau of that film starring Brad Pitt and bubblegum. The downloadable app for the iPhone, Nokia 6210, N95 and N96, isn’t exactly accessible to the masses, but if you happen to posses one of the mobiles mentioned above and is looking for a service of this sort, who cares about the unfortunates?

The new service means Vodafone customers (with compatible handsets) can treat themselves to a range of video clips, including the usual assortment of categories – film, music, comedy, animation, travel and sports. The BBC has also contributed content, offering comedy clips and short extracts from David Attenborough’s nature documentaries.

The service will initially be available on a six month trial – if it’s a hit, perhaps other handsets will be brought into the fold. We’ll let you know in six months time.