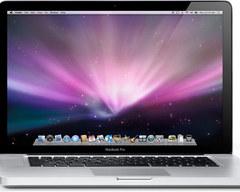 Remember when Apple came up with the term ‘unibody’ (think leotard) to describe the piece of aluminium covering the outer shell of its latest MacBooks? Not only does this piece of aluminium make you computer lighter than previous casing, but it’s kinder to the environment too, with 30 percent less power draining from the screen.

So, Macworld is imminent, which means those Apple rumours have been surfacing all over the place. And reportedly, the 15-inch MacBook pro is to get a 17-inch sibling with a fixed internal battery, similar to the MacBook Air, that’ll probably annoy the Apple sphere as much as the iPhone’s non-removable battery has.

So, as well as a Mini Mac upgrade, could those makers of Mac unveil it the 17-inch MacBook Pro this week at Macword? Perhaps. All will be revealed soon.