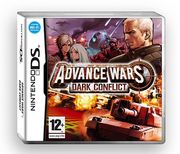 According to the folks over at WiiWii, it’s been ‘a solid but unspectacular year’ for the DS, but there’s exciting things to come, and there’s been some extremely playable games in the meantime. They’re in the process of drawing up their Top Ten releases of 2008, and they’re the world’s leading authority on such things, so they’re in a pretty good position to do so. Check out the first five here.