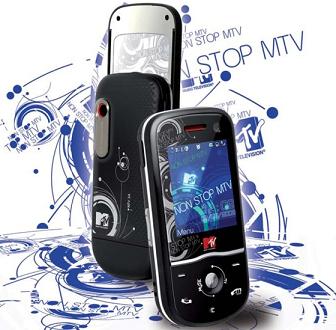 It’s understandable and logical for a phone that bears the name ‘MTV 3.4’ to have “non-stop MTV” access for its users. ModeLabs, the manufacturers behind such luxurious mobile communicating equipment as the Christian Dior, has announced the arrival and availability of the MTV 3.4, designed for the younger “MTV” generations to take advantage of. So, it’s basically for people who like a bit of Dirty Sanchez, Pimp My Ride, The Hills et al and relentless music videos. But what does “non-stop MTV” mean exactly?

Well, it means access to exclusive ringtones, wallpapers, MTV games (Dirty Sanchez and Urban Attack), MTV playlists and of course one click access to MTV itself – all of which have been designed to bring users closer to the infamous music channel.

If you can draw yourself away from everything MTV, there’s a 2 megapixel camera, MP3 player, RSS feed reader and 3G connectivity to engage in too.

Unlike the Christian Dior, the MTV phone is pocket friendly at 29 Euros (and I should think so – it’s for the kids), however it’s only available in France at the moment, with no word on it branching out to other countries.