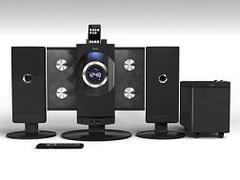 If you’re looking for something more than your average iPod dock – i.e. something that’s not just a square or rectangular box with an iPod dock situated the front – this swanky and elaborately designed i9500 iPod/CD sound system looks like a great choice. Not only can you adorn your desk with it and have friends and colleagues look upon it with envy, but you can fix it to your wall and become one of those people with a cool wall mounted sound system.

So, technically, this is a bit more than an iPod dock. There’s a fully fledged stereo with a subwoofer underneath all that slickness. During the creation process, iLuv thought it’d be a good idea to give you not one, not even two, but four CD players. Yes four. Some might see this as an unnecessary feature, but I think iLuv was going somewhere with this. Picture this – you can’t decide what to play between your Kings of Leon, Snow Patrol, Linkin Park or Katy Perry CD. Why not just chuck them all in and alternate to cater to your indecisiveness. Ok, granted you could probably do all that from your iPod, but if you happen to still be a CD lover (of which there are still many) the i9500 has enough space for four of them.

The usual stereo features are in place – FM radio and alarm clock functionality – and there’s also an SD USB port support. And with 45W of music pumping power, the i9500 should satisfy your inner audiophile.

There’s no word on pricing at the moment but keep your eyes peeled for this one come January. Something tells me CES is when we’ll be hearing about this again.