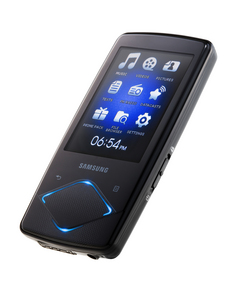 We told you about Samsung’s unimaginatively named Diamond Q1 MP3 player a few months ago. It was around the IFA era, but we were a bit hazy on specs and prices, only being able to tell you about the DNSe 3.0 update for better audio quality, its audio upscale function, musical intuitiveness that applies bass and effects to your tracks accordingly, memory capacity (4, 8 and 16GB) and special features such as a screen dimmer to ‘awake the user’s emotional feelings’.

So here’s the stuff we didn’t tell you. It’s compatible with the iPlayer, so you can transfer all the episodes of Eastenders you’ve missed onto your MP3 player and catch up on the move, there’s also FM radio with 12 preset ‘street modes’ to accommodate noisy environments and to assist you with blocking out the jarring and poorly recorded rap coming from the mobile phones of many a teenager. And most importantly we have the prices – £59.99 (4GB), £79.99 (8GB) and £109.99 (16GB). It might not be the diamond most people would go for, but you could still make someone happy this Christmas with a diamond of another variety.