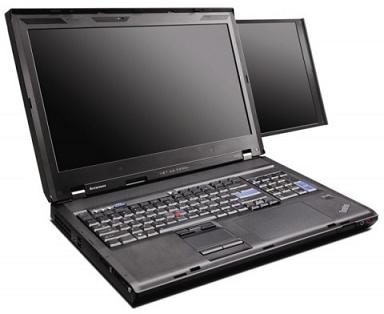 Internally, the ThinkPad W700ds has got nothing to shout about, as the specs are pretty standard – quad-core 2.53 GHz Intel Core 2 processors, up to 8GB RAM, 17-inch screen, 320GB hard drive, an Nvidia Quadro 3700M graphics card and a dual-layer Blu-Ray drive. Externally however, this thing is nothing short of impressive and momentously cool. As well as showing off an internal colour calibrator and a palm rest digitizer, it houses a hidden 10.2-inch LED display that slides out from the 17-inch screen.

It can even be tilted back and forth to ensure you achieve the best viewing angle. So, for example, while you’re photoshopping away, you could use the other screen to send a few emails or indulge in a bit of instant messaging. The possibilities are endless (well, not really but you get what I mean).

Based on the picture, it’s not really a beaut of a machine, and it’s likely to come with added chunk. But this is only expected due to its secondary slide out screen, which won’t just magically appear – it needs to come from somewhere.

According to the worldwide product marketing manager for ThinkPads, the W700ds, or the souped-up “mobile workstation,” as Lenovo calls it, runs “incredibly cool” thanks to dual fans and dual-heat reduction systems. He also boasted that its primary display is 400 nits brighter than any other netbook on the market.

So apparently, convenience comes with two screens, and it’ll be making an appearance at CES come January. Watch this space.