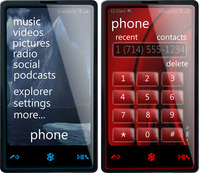 Those rumours of a Zune phone just refuse to go away. Soon enough, the bloggosphere’s going to get a little fed up of this particular web buzz which could prove potentially perilous for Microsoft. It’s getting a bit like the boy who cried wolf, or the rumour that cried a new Zune phone. When, or if the Zune phone finally does arrive there’s a possibility it’ll be greeted with “meh”, by folks who gave up after the Zune phone rumour churned in the mill for then 100th time.

This rumour’s been around the block more times than a streetwalker. And this time the resurfacing of the rumour stems from the announcement that CEO Steve Ballmer (instead of Bill Gates) will be delivering the keynote speech at CES next year. You may or may not be aware, but Microsoft almost always unveils something grand at CES, which could spell a Zune phone.

A research company called Global Equities research, claims Microsoft will be unveiling a device that’ll merge features of the Zune and the “Danger” Sidekick, as well as “some motion enhancement features” with the assistance of an accelerometer. The words ‘pinch’, ‘of’ and ‘salt’ spring to mind.

We’ll be at CES in January, so as soon as the word is out, we’ll let you know what’s going on.

Like this? Read this: The Zune 120 gets treated to blue and red makeover

One thought on “The Zune phone rumour resurfaces again”