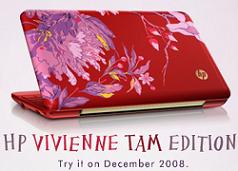 What a great day. It feels like Christmas has come early. We thought the waiting game for the oriental chic Vivienne Tam Mini 1000 netbook was going to last until February (which is what we were initially told) but as it happens, it’s available to order right now from HP’s website for $699 (around £470). It goes without saying the 10-inch netbook is a beaut, but what’s under the hood? There’s a 1.6GHz Intel Atom processor, 1GB of RAM, up to 60GB of hard drive storage and it’s all packed into a 2.45 pound machine that’s just under an inch thick.

Once again the worlds of fashion and tech have combined to bring the equally geeky and fashion conscious something worth shoving someone out the way for. But if you’re not into conspicuous designs, you may want to avoid it – this certainly isn’t an understated piece of computing equipment.