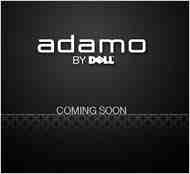 Are they? Aren’t they? Can they? Can’t they? The internet is blazing with wild and crazy speculation as to just what Dell have up their sleeve. Well, slightly buzzing. And sort of wild. And a touch crazy. OK, fine. There are a couple of people who have read an article in the New York Times claiming Dell is going to launch a MacBook Air rival called the Adamo, in February.

Dell don’t *do* commenting on rumours (spoilsports) but rather brilliantly, the journalist has translated the facial expression of the Dell spokesperson when he mentioned his speculations into actual dimensions of the product. To quote “If looks could reveal product dimensions, then I’d guess that Dell’s going even thinner and lighter than Apple”, which, the internet being the internet, has in turn been translated into ‘Dell are bringing out a laptop thinner and lighter than Apple. Fact’.

There’s a lot more speculation, with an analyst predicting Dell could shave $400 off the price of the MacBook Air. Which by the time you’ve read this, will have become ‘Dell’s new laptop will be $400 cheaper than the Air. Fact’.