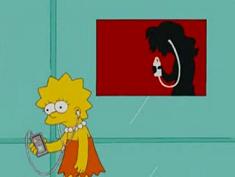 There aren’t many celebrities who haven’t fallen victim to the comical and satirical genius of Matt Groening at some point, which in a way is a great compliment (you’re not anyone until you’ve had the piss taken out of you on The Simpsons right?). Tony Blair’s been a victim, as well as Michael Jackson, Aerosmith, Bill Gates, Mick Jagger and a whole host of others. Well this time Apple, or shall I say Mapple, bore the brunt of the mockery.

The lampoonery begins when Springfield mall gets its very own Mapple store, which Lisa responds to as being “so sterile”, complete with a mipod, a miBox and other Mapple products. Krusty also has a dig by shouting how much he hates his miPod and not being able to “watch movies on a screen this small”. Bart then does what Bart does best and publicly shames Steve Mobs and the crowd of gaping geeks, just as he’s about to proclaim a new announcement.

It’s a *must-see* episode. Check out snippets of it after the jump…

He says: “You’re all losers. You think you’re cool because you buy a $500 phone with a picture of a fruit on it. Well guess what? They cost 8 bucks to make and I pee on every one! I have made a fortune off you chumps and I have invested it all in Microsoft. Now my boyfriend Bill Gates and I kiss each other on a pile of your money”.

Catch up on your Apple news here