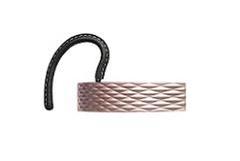 As far as Bluetooth headsets go, the Aliph Jawbone range doesn’t fare too badly in the style department. Nothing’s changed since we last told you about them, apart from a style overhaul. There’s a new colour in town – Rambling Rose – a matt metallic-y pink (which explains the rose but not the rambling part?).

The headset still packs ‘NoiseAssassin’ technology, originally developed for the US military, which according to Susi is “probably the best use of English Language in technology”. So if you’re ever in tough, battlefield environments you’re guaranteed clear communication. When you’re not surrounded by such environments, its patented Voice Activity Sensor will separate your voice from all the background noise so only your voice is heard, giving you clutter free convo.

The Jawbone headset still gives around 4 hours of talk time and an 80 percent charge in half an hour. Stay on the right side of the law in style here for £79.99.
Jawbone