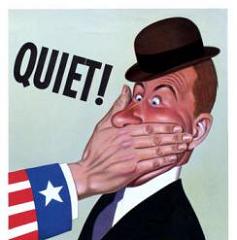 Obviously in our case that’s a little difficult, but we’re not ones to rant about our jobs because we love it here. The same can’t be said for one unfortunate journalist. By unfortunate, I mean stupid. Stupid because while out in the States to cover Obama mania, one man thought it’d be ok to publicly and drunkenly rant about how he attained his coverage and voice exactly how he feels about his boss. He didn’t go easy on the expletives either. Little did he know he was being filmed by a tourist and like most randomly filmed videos, the footage ended up on Youtube.

If it wasn’t bad enough that he called himself a “proper journo” (“It’s not going to be online, it’s going to printed in papers. I’m a proper journo”), he then makes sure the final nail is securely slammed into that coffin by admitting “I’ve gone and copied the quotes off the BBC [news website]”.

Check out part one of the rant after the jump…

Realising he may have made a fatal error (and drank way too much) he returns to Youtube the next day retracting his rant filled ramblings from the previous day, by which time over 285,000 people had been a witness.

“I was off duty, I am on official holiday working at the South Beach Miami Barack Obama campaign where I had just done an 18-hour shift trying to make the world a better place. Please check every BBC News outlet and see if I have cut and pasted anything. I have not, it was a joke and should be taken in the spirit it was said.”

But it was too little too late for Adam Smith. Rather than get the boot he’s taken redundancy after “bringing the organisation into disrepute” and will be leaving the Birmingham Post by the end of the week.

You’ll have to head on over to Youtube for parts two and three.

This isn’t the first time someone’s had to suffer the consequences after being caught out online. You’d have thought this imbecile would have realised. I guess being a ‘proper journo’ means he’s out of touch with the power of the net.