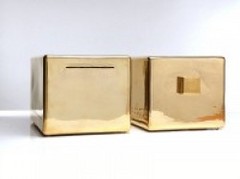 The man with the Midas touch has been all over this golden PC it seems. But this golden box isn’t made entirely from gold (that’d be one costly PC). Instead, it’s made from ceramics with a gold coating, which makes the price more pocket pleasing. A quick visit to the product page tells me the Pure Gold PC is “hand molded, shaped and glazed” and is “like a sculpture, a vase, a bowl”. – which sounds like anything but a computer.

Based on the picture, I’m going to go with the assumption that one of the gold boxes isn’t the monitor. I’ll just assume you buy that separately seeing as there’s no mention of a gold framed monitor.

Check out its specs after the jump…

Its specs are doing a whole lot better than the design – Core 2 Duo processor, 4GB RAM, 1000GB HDD, 7.1 surround sound, 8 USB ports, WiFi and two firewire ports. Not bad eh? It’s not so much the insides as much as the outside that bothers me. If you’re fan of all things gold, this might have great appeal, but for me it resides in distasteful and tacky territory.

There’s no word on pricing or availability, but expect someone to slap an overpriced tag on it thanks to its golden fleece.