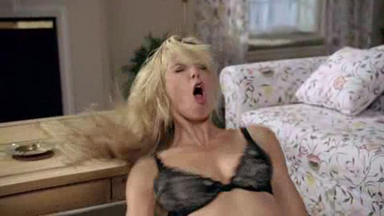 In light of the column I wrote last week on the association of technology with women, it couldn’t be more palpable than it is in this snippet of advertising for Guitar Hero World Tour. It’s a short vid of the ever-stunning Heidi Klum, donning the pink shirt and white socks as famously worn by Tom Cruise in Risky Business, re-enacting the infamous air guitar scene. The only difference is, this version has added sex appeal for the boys. The pink shirt is done away with after the first 5 seconds, inevitably causing many eyes to pop out of sockets like a Loony Tunes character as she struts her stuff with rather orgasmic facial expressions and sexual body language. Was it necessary? Probably not.

Check out the Klum after the jump…

We know sex sells but goddamn, could Activision make it any more obvious. At least they’ve made a version for the girls too.

Whether this makes every red blooded male want to rush out and make the purchase or just go to the bathroom and lock the door is beyond me? Note to the delusional, Heidi Klum won’t be gyrating in her under garments around your living room – but you can still dream.

Based on its pervy and pun-filled comments on YouTube, I’d say it went down pretty well, satisfying internet pervs across the globe.