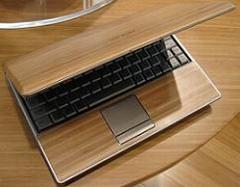 The Bamboo notebook is seriously green. Not only is it encased entirely in artisan-grade Bamboo panelling, but “it’s truly green throughout every phase of its life”. So as well as having an eco-friendly outer shell, the majority of its insides are kind to the environment too. This means when you’re ready to dispose of your Bamboo notebook, its inner components can be recycled too, as long as the parts that aren’t recyclable are removed.

Asus has dedicated itself to a truly green notebook, so as well as the above, the actual computer itself is full of power efficient technology. For a start it has a super hybrid engine, a result of the redesigning of the hardware, software and BIOS by Asus engineers. This gives users ultimate control over the laptop’s performance – including better battery life (between 35 and 70 percent when compared to other notebooks), screen brightness, CPU performance and automatic power level adjustment to match the power requirements of the Bamboo’s components.

The specs don’t take a blow due the Bamboo notebook’s dedication to being green either. So as well as reducing your carbon footprint and helping to save a few hundred trees, you get a decent running laptop too. It packs an Intel Core2 Duo Processor, runs Windows Vista, has 256MB DDR2 VRAM, and sports a HDD rather than SSD. It also features an 8-in-1 card reader, a 0.3 megapixel webcam and is available in12.1 and 11.1-inch models.

With a starting price of £1,349, Asus proves you can keep up with modern life and have something that’s committed to preserving the environment at the same time – Go Asus.

Keep your eyes peeled for a preview later on in the week.

Check out the latest laptops here