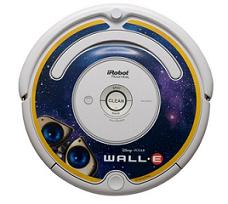 Tidying the house and genuinely enjoying it is only a pleasurable experience for the downright cerazy (it’s got to be done but that doesn’t mean we have to enjoy it). Getting a robot to do it is a much better option isn’t it? And if it’s more than happy to take over your role as house cleaner, who are we to stand in its way. Unfortunately the Roomba 530 is not on par with Rosie from the Jetsons, but it’s the next best thing in robot cleaning equipment.

When Katie took the Roomba home to live with her, it proved to be a very handy robot indeed – “There’s no way I’d go back to life without the Roomba” – and now there’s a Wall-E edition (incidentally she also loves Wall-E) she may not be able to contain herself.

Nothing’s changed – it’s still the same old Roomba. So it’ll still have a little trouble navigating around the more oddly shaped parts of the room and you will need to move objects such as chairs and shoes to achieve the best results. But it will be doing a substantial amount of your housework – you couldn’t ask for a handier robot.

It’s initially coming out in Japan for £50 more than the non Wall-E version (that’s an expensive sticker) with only 400 scheduled to go on sale from November 20th for ¥84,500.

It’s also unknown whether the Wall-E edition comes packed with Wall-E sound effects (we’d like to think it does).