We’re used to MP3 players that come in multiple colours by now (thanks Apple) have an interesting interface (the Spinn comes to mind) and double up as PMP’s (where do I even start with this one?) but one that also integrates a CAMERA and video camera is a new idea. That’s what the E-matic EM324CAMP promises to do, as within its sleek shell it hold a 2 megapixel camera and video option that can record up to 70 hours of video, in 7 different modes. You can choose from Sepia, Black/White, Solaris and more for those ‘real’ film like effects and then you can view your masterpiece on the 2.4 inch screen. 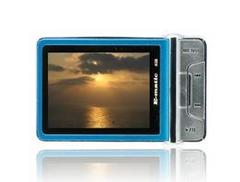 There’s also a built in speaker if you want to share your efforts with your friends as well as a dedicated 3.5mm jack, so you can use whatever ‘phones you wish with it. It has 4GB of internal memory and is expandable via the MicroSD card slot. File-wise it supports a selection of formats, from MP3, WMA, AVI, MP4, Jpeg, BMP’s and more. It also says it’s e-book compatible, but as there’s no e-ink reader I’d probably avoid this option.

For such a teeny price I have to admit it sounds very tempting; shame it’s only available in the US though.