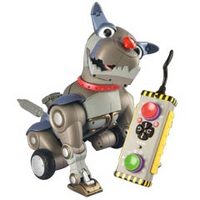 The latest generation of the WowWee robots moves away from their cute and fluffy persona to that of a bastardized Cyber Dog. He’s called Wrex the Dawg, and looks like he’s been hastily assembled out of factory leftovers, with his remote modelled on that of a crane. Forget the Pleo, wave goodbye to the Roomba, and welcome this rabid looking dog to the scene.

He has a personality to match his exterior, with three mode settings of happy, angry and crazy. Apparently you can tell the difference based on his eyes, and as he has 10 eye combinations and nine motors, I guess we’re looking for some seriously *strange antics*.You can use him to guard areas, as his internal motion sensors will react to foreign objects, and you can also teach him to dance, beg, and play dead.

There are three main activities to enjoy, exercise (lots of walking in circles), Call of nature (don’t you love taking a robot to the toilet?) and Hunger. Just to confuse things even further, you can also reprogramme him to be a cat. Yes, you read that correctly. I guess if you’re bored of him eating, sneezing and fake peeing in the bushes, you can have him doing the same motions as a feline. Whether this will include chasing dustballs and climbing trees is not confirmed, but it’s almost certainly going to sulk and treat you like a servant.

So who wants to add this schizophrenic pup to their robot collection? I’m actually kinda tempted…