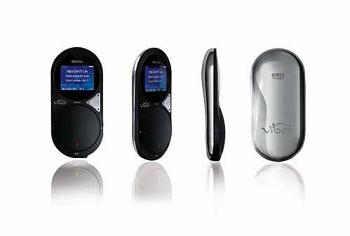 Trekstor call themselves ‘the leading manufacturer of high quality MP3 players’, but has failed to impress me in the past. This could all be about to change with the release of three brand spanking new MP3 players currently on show at IFA – the vibez Flash, i.Beat organix and i.Beat Nova. First up, the vibez Flash, which has basically added flash memory to the original model, boasts an integrated DJ mode that will automatically recommend songs based on your previous listening habits.

It also sports a cross-fading function that claims to smoothly switch from track to track and is compatible with DRM9 and DRM10 so you can play those internet purchases. It’s available in storage capacities of 8GB, 16GB or 32GB and will cost between 79 to 129 euros.

The i.Beat organix 2.0 is another revamp of the original model. On offer is 55 hours of playback, SRS WOW technology and two headphone jacks – one of which can be used as a line-in input for recording from other audio devices. Available in black, white, silver and green in either 4GB or 8G capacities with prices ranging from 39 to 69 euros.

Lastly, is the i.Beat nova. Looking cleverly like a bog standard memory stick, this little MP3 player features an OLED screen, a line-in jack, a voice recording function and is also available in either 4GB or 8GB of memory. This little thing will set you back between 29 and 49 euros depending on capacity.

All products are due for release at the end of September.