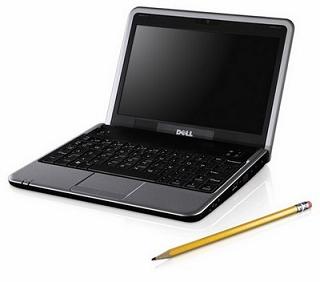 No, this isn’t another of the endless teasers about the Dell E, this is actually about the Medion Mini as announced at IFA 2008. The only problem is that Medion didn’t bother sending out any pictures and, what with the famous Dell pencil, it seemed like the perfect image to get across the sense of what I’m talking about. So, the market launch of the Medion Akoya Mini E1211 is planned for October for the rather uncomfortable price of 400 Euros, which works out at the current exchange rate as far too many pounds, £321 to be precise – Dusty Bin not included.

The reason for the outlay is likely because it’s actually a 10″ machine, which, to be honest, comes as a little relief after feeling like I’m getting premature arthritis from typing on an 8.9″ Eee PC.

After what Medion has already announced, I’m looking forward to getting a closer look at their entry into the sub-notebook market and here’s having a few fingers crossed that they don’t let us value for money customers down. If I can hunt it down at the show, I’ll bring you some footage.