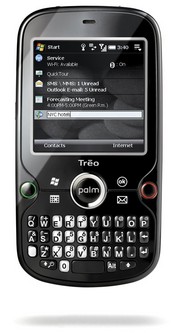 Everyone else might be enraptured by Apple and Blackberry, but Palm still has a loyal, if rather small, following. The Treo Pro is both a reward to those few, and a recruitment call for others to join the group by Palm themselves.

It doesn’t look a million miles away from the design of the Blackberry Bold (I suppose there’s only so many differentiators if you’re going to make a black device with a QWERTY keyboard) but runs Windows Mobile, rather than the RIM software. Similarly, it does have HSDPA, WiFi, GPS and will supporrt micro SDHC cards up to 32GB.

There’s a paltry 2 megapixel camera, but on the plus side, it’s a standard 3.5mm headphone jack. Palm taketh away and then giveth again…

Should you be a Windows Mobile/Palm/email and serious biz stuff fan, you’ll be able to pick up the Treo Pro from September SIM free for £399. Alternatively, it’ll be available on the O2 and Vodafone network.

One thought on “Palm make the Treo Pro officially official”