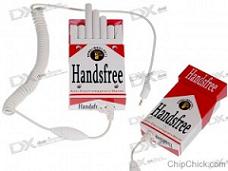 If you were thinking this post is about some kind of lazy/technological way to smoke cigarettes without the use of your hands, you’d be wrong (but wouldn’t that be great). It’s actually about a headset shaped and decorated like a packet of Marlboro Reds. One for the smokers me thinks. It seems unlikely any non-smoker would willingly walk around promoting the wonderful I mean unhealthy habit that is puffing on a cigarette.

With the smoking ban bestowed upon us for just over a year now (*sad face*), you might get a bit of stick when pulling it out in an enclosed public place. But all you have to say is ‘hey, chillax, I’m just answering my phone’. Compatible handsets include those from Nokia, Samsung and Sony Ericsson. At $6.79 USD, it’s worth it just to wind a few people up.