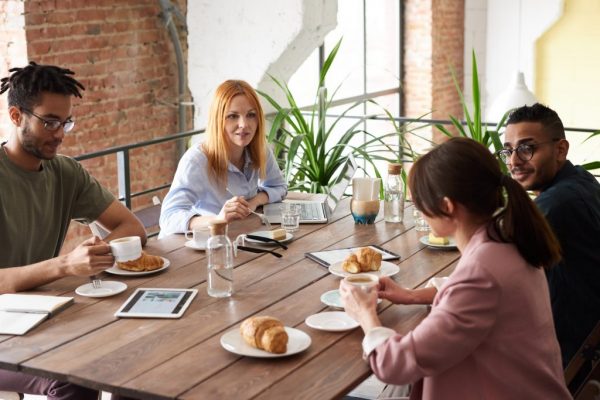 Family mealtimes are now dominated by the ‘Greta Effect’ with environmental concerns such as recycling, plastic and climate change among the hot topics over dinner.

A study of 3,000 parents with children living at home found the rise in popularity of 17-year-old eco-activist Greta Thunberg has led to youngsters discussing the subject of the environment at the dinner table.

More than eight in 10 talk about environmental issues at mealtimes, with half regularly discussing recycling and 38 per cent having a conversation about plastic in the ocean.

One in three regularly debate the topic of climate change.

The new Nation’s Conversations report, commissioned by frozen food brand leader McCain, found that more than three quarters treat mealtimes as an opportunity to talk openly with their family.

Activist, presenter and mother of two Katie Piper, working with McCain, said: “My children, who are five and two, are definitely more aware of environmental issues and the small things we can all do to help combat them.

“They learn about the importance of recycling in school so it’s naturally a topic we discuss at home.

“My girls also know the different bins and what goes in each – as Belle is a little older, she has chores and it’s one of hers to ensure the recycling is correctly sorted.

“It’s important our children are educated on the subject so they are equipped with the tools to make more conscious decisions around rubbish and recycling, it also gives them a sense of responsibility too.”

The research also found a quarter discuss the likes of Greta Thunberg and David Attenborough around the dinner table and seven in 10 enjoy talking about topical issues with their kids.

Three in five said the conversations they have with their family today contrast from when they were younger, with 89 per cent talking openly about subjects which were previously off limits.

And more than half said their children are more engaged with current affairs and keen to discuss them compared to when they were their age.

Similarly, almost two thirds said conversations around the dinner table about climate change and the environment have become more frequent in the past year.

In comparison to today, only a sixth of parents remember discussing such things with their mum and dad.

A fifth admitted their child has expressly helped them many times by telling them how to combat climate change.

And although 77 per cent of mums and dads admitted they have felt encouraged to be more eco-friendly after a conversation with their family, a sixth have been ‘told off’ by their youngsters for not recycling.

The research also polled 500 children aged 7-17 to reveal the contrasts between the generations – with one in five frustrated with their parents for leaving lights on and wasting food.

More than half said that they feel angry at adults – including their parents – about how they have treated the environment.

And 59 per cent of the children polled said climate change makes them feel terrified, nervous or sad.

Almost two thirds said they enjoy learning about climate change and six in 10 get the majority of their information from their teachers, followed by parents (54 per cent) and TV shows (46 per cent).

Mark Hodge, marketing director at McCain, said: “Our brand-new research from the Nation’s Conversations Report 2020 has found there is one thing we’re talking about and debating more than ever around the dinner table – the environment.

Children’s top 20 concerns about the environment: