Tina Fey’s latest series hit Netflix on Friday, and we’ve watched all of it. Obviously. Here’s everything you need to know to pretend that you have to.

Hey, even 30 Rock wasn’t the new 30 Rock straight away. Despite being written by the same Tina Fey and Robert Carlock dream team, humour-wise Unbreakable Kimmy Schmidt is more at season 1 of Parks and Recreation-level – intriguing, pleasant, full of potential, and when they come, the good jokes are really good jokes.

And we all know what happened to Parks and Rec, don’t we? It turned into the greatest thing since 30 Rock.

Even if you don’t quite laugh yourself sick, the show will keep you clicking ‘Next episode’ long past your bedtime through sheer force of cheeriness alone. It’s easy watching, but not stupid watching – the kind of thing you’ll put on ‘in the background’ at first but then end up giving six hours to without protest.

In fact, it has the same giddy, rainbow-coloured sweetness cut through with just the right amount of lemony sharpness that The Mindy Project did in its first season –and unless you’re some kind of determined televisual goth, that can’t be a bad thing. Anyone who enjoys nice things and smiling will eat it right up.

It has a great premise

The plot is thus: Kimmy (Ellie Kemper) is rescued from an underground bunker in rural Indiana, where she and three other women have been imprisoned in a doomsday cult for the last 15 years. She decides to move to New York to start her life anew, moves in with Tituss, a struggling Broadway performer/street busker, and gets a job as Nanny to a filthy rich Upper West Sider. Those are the bare bones but there is LOADS more to it, all ready and waiting for you with the click of a Netflix subscription.

This isn’t a bad thing, of course. Having come to terms with the fact they’re probably never going to turn The Rural Juror into a real Broadway musical, we needed Jane Krakowski back on our screens saying things like, ‘I went to the gynodermatologist. I need to lie down with my feet and heart above my vagina’ as soon as possible – and this was the best way to get it.

The opening theme is your new favourite earworm

It’s an auto-tuned faux viral video interview with a neighbour who’s witnessed the bunker rescue, and along with various semi-comprehensible lyrics it contains the phrase ‘these females are as strong as hell’, which we’re now going to have put on a tote bag. Damn straight they are.

Without any overt back-patting or choosing to have a predominantly female cast, Kimmy Schmidt gives killer roles to a wide range of women of different ages. There’s Carol Kane’s turn as dippy landlady Lillian, Amy Sedaris as a caricature divorcée, Christine Ebersole as Julian’s chintzy first wife and a brilliant cameo from Tina Fey herself, who couldn’t resist wigging up as the world’s most incompetent laywer. Even Kimmy herself turns 30 in the first season without much fanfare, and it’s a far more realistic portrayal of a modern 30-year-old woman than most we’ve had to date – with or without the 15 years spent in a bunker.

It has its flaws

For all its good points, race relations in the show are unignorably tricky. There are observations that go straight to the jugular in a good way (‘WHITE WOMEN FOUND’ reads the news headline across Kimmy and her sister-wives’ discovery, above the much smaller subtitle ‘Hispanic woman also found’), but there’s also the lazy characterisation of Dong, Kimmy’s Vietnamese classmate and love interest – he’s a maths whiz, works as a Chinese food delivery boy, struggles with English… and is called Dong, a joke most of us barely laughed in Sixteen Candles two decades ago.

Then there’s the subplot of Jacqueline’s Native American heritage, which is still teetering on a borderline between subversive and offensive – and to many people, has tipped right on over into the unacceptable zone. The show will have to demonstrate some searingly right-on self knowledge to make up for the fact that Krakowski is a white woman playing a Native American, if it really can at all.

The whole doomsday cult premise is inspired, but within three episodes Kimmy seems to have acclimatised to her new big city lifestyle about as easily as any average small-town kid who has to live in a basement flat, take a job as an au pair and learn to eat kale. Don’t shoot your comedy load too quickly, guys! You could have given us a whole season where she did little more than brush out her mole woman French plait and learn how to use Wikipedia.

The danger is that Unbreakable Kimmy Schmidt could go the same way as many sitcoms (the best example of which is the late, barely lamented Cougar Town), shaking off its key gimmick too quickly in a bid to couple up the main character and ending up generic, grasping for new plot arcs and then inevitably, decommissioned. Don’t let that happen to Kimmy, Tina. We trust you.

Ellie Kemper is a joy

The Bridesmaids and The Office star has been on the periphery of comedy stardom for ages now, and it was about time she got the chance to shine. As the titular Kimmy she’s a sunny mix of childlike wonder, girl-scout gumption and dress sense that makes Angelica Pickles look like Victoria Beckham. But she also has razor-sharp comedy timing

He’s been steadily unpicking the spell he wove as Don Draper with a run of great comedy roles, and here, as cult leader and kidnapper Reverend Richard Wayne Garry Wayne, he’s at his least dreamy yet – and all the funnier for it. 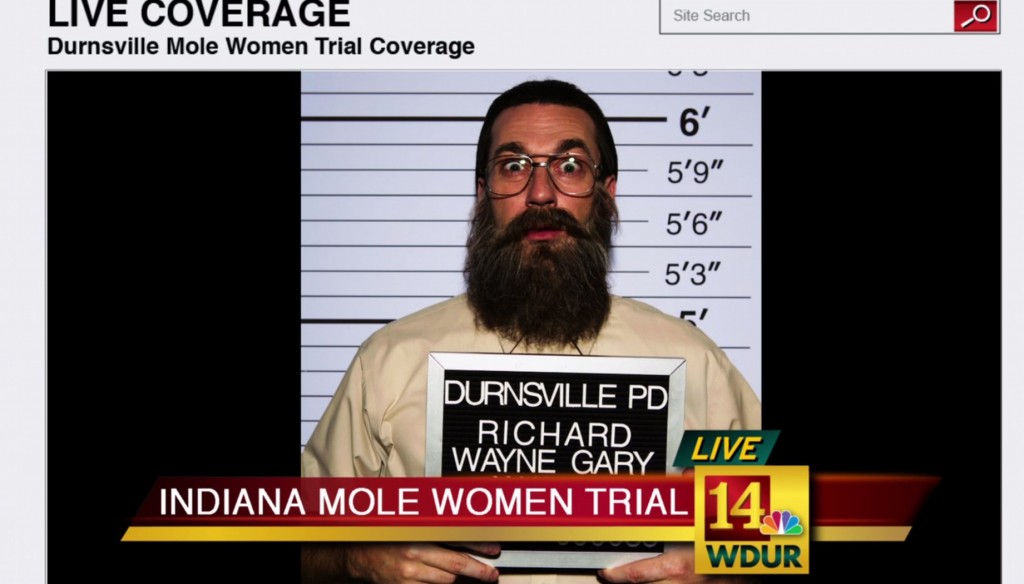 Where in America isn’t a middle-of-nowhere state you can make jokes about?

Kimmy is from Indiana, a fact that’s used to explain away about as much wide-eyed ignorance as the fact she spent 15 years living in an underground bunker. Even after seven seasons of Parks and Recreation we didn’t know Indiana was meant to be all that backward, but now we can officially add it to the list of ‘haha crap’ states along with Tituss’ native Mississippi, Jacqueline’s North Dakota, Ohio, Iowa, Utah, Missouri, Arkansas, Wyoming… and wherever Community is meant to be set.

Where isn’t a middle-of-nowhere state you can make fun of? New York. Note that down.