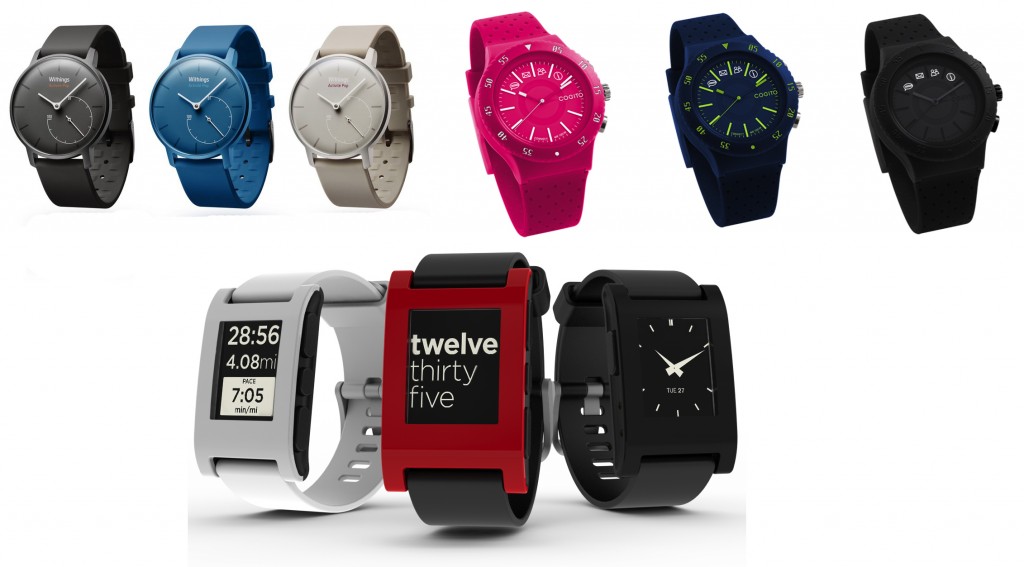 The biggest tech brands on the planet may all be competing to design the best smartwatch, the smartwatch to rule them all. But with the new Apple Watch rumoured to set us back well over £220, I’ve collected together five of my favourite smart watches with much more wallet-friendly price tags.

Granted many are not nearly as advanced as devices already released from the likes of Motorola or ASUS, in fact they’re more like ‘moderately bright’ watches rather than outright ‘smart’, but if you want a device with specific features rather than one that’s all-singing, all-dancing you might be in luck.

So whether you’re interested in always-on notifications, fitness tracking or a smart watch that looks more like a way cooler, regular old-school watch I’ve found an alternative for you that’ll be half the price of the competition.

The Cogito Pop looks really similar to those super popular ICE watches that were all the rage a few years ago, with a fairly chunky design and a huge range of different colours. In terms of tech it’s not the most advanced smart watch, but it does alert you to messages, calls and all kinds of social notifications via different LED icons.

There are a few other cool ways the Pop can interact with your phone, like enabling you to control music via the watch face, trigger your camera or location a lost mobile.

The Cogito Pop comes in a range of shades and each has a slightly different take on the way the hands and numbers are displayed, too. I’m a tad obsessed with the ‘blue electric’ colour way as it has a lime green accent colour that looks AWESOME. The ‘black mamba’ is also great for a more subtle option, as it’s ALL black and looks a bit more unusual and matte.

Admittedly, it’s fairly basic in the smart watch stakes, but if you just want to be alerted of an incoming message or notification on your phone without being able to actually read them or respond, then it’s a good option and personally I prefer that kind of functionality to the more advanced devices. It also looks way more stylish then square-shaped wearables and it’s perfect for situations when you can’t keep looking at your phone, like in a meeting, when you’re working out or even on holiday because it’s waterproof up to 10 metres underwater.

Check out the Cogito website for more information about the Pop. The price of the Cogito Pop massively differs on Amazon.co.uk depending on what colour you’re after. The raspberry crush is going for £79.90 here but you’ll find most of them for under £90 from various sellers. 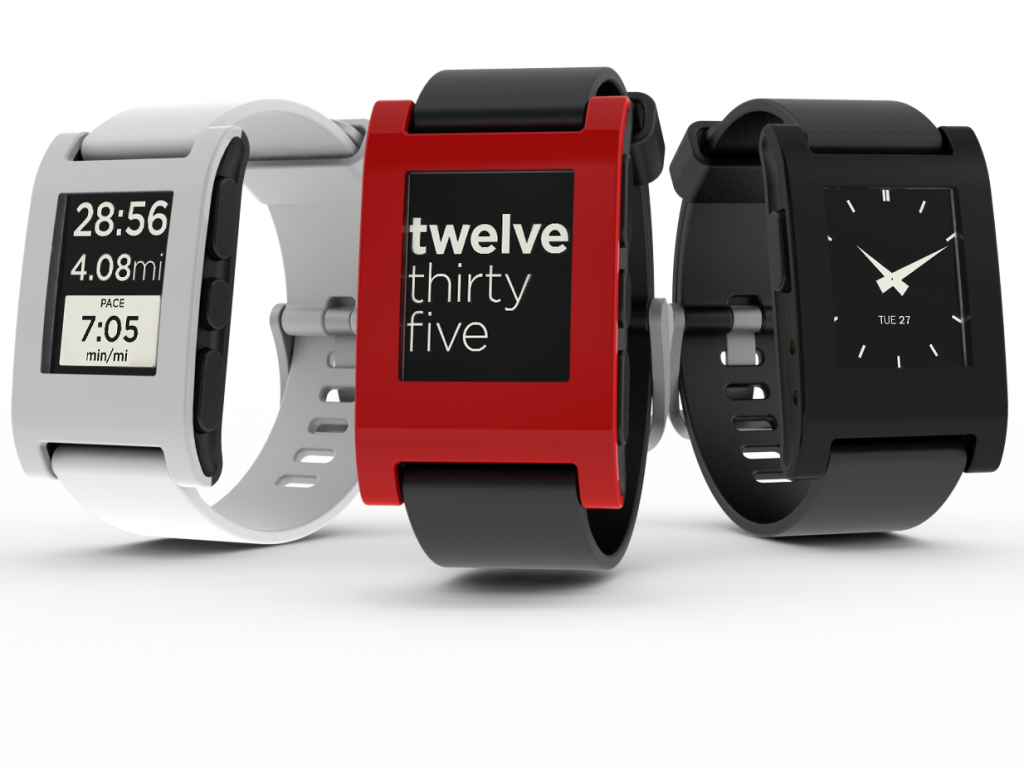 The best for tech-lovers: Pebble Smartwatch

The Pebble smart watch has been a key contender on the wearable tech scene ever since it smashed its Kickstarter goal in 2012.

The distinctive-looking wearable alerts you to all kinds of notifications at a glance – and we mean it properly tells you what they are unlike the Cogito Pop that just kinda flashes. You can add a number of different apps to your Pebble to make it truly yours, so you can use it as an awesome productivity tool to read notifications, check the news and keep an eye on weather or see it as a health and fitness tracking device by adding apps like RunKeeper and using the device’s built-in fitness tracking sensors. It’s totally up to you.

For an always-on device it’s got a fairly impressive seven days battery life, which is due to the fact it has an e-ink display rather than an LED one, but it’s still readable in most lighting conditions.

Some people aren’t so keen on the Pebble’s plastic casing, which is why the brand upped and stakes and launched a more high-end version called the Pebble Steel. Although it’s £80 more expensive than the original Pebble, it is often cited as the best smartwatch currently on the market. So may be worth those extra pennies.

You can buy a Pebble in a range of different colours from the official Pebble website for just £99.99. 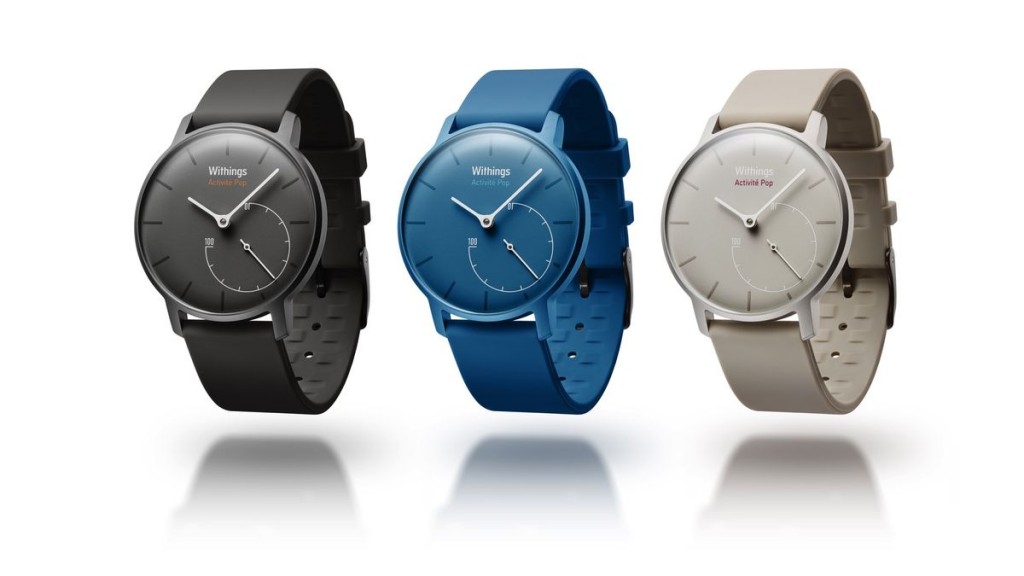 The Withings Activite Pop is more fitness tracker than smart watch, but given the fact it looks EXACTLY like a watch, I’m throwing it into this round-up because the lines are a little blurry on this kinda thing anyway, right?

This rather slick-looking wearable has been described by the brand as ‘the new face of activity tracking’ and although that’s clearly a well-thought-out marketing line, I have to agree. Many people don’t wear both a watch AND a wearable fitness tracker, so why not make a great-looking, watch-like fitness tracker instead?

The Pop does everything you’d expect of an activity tracker: activity tracking, sleep tracking, swim tracking and has a silent alarm. Like the Misfit wearables it also runs off a watch battery, so you won’t need to worry about charging it up every second day.

The app presents all of your data in handy charts and there are gaming elements too, like scoreboards and competitions with friends.

I haven’t had chance to review the Activite Pop yet, but I have a feeling I’m going to fall head-over-heels in love.

It looks like the Withings website still has a pre-order system for the Pop, but according to the blog it’ll be on its way within the next week or so and will set you back £119.95.