In his speech at the United Nations last week, President Obama referenced East London’s Active Change Foundation – the community group who began the #notinmyname campaign earlier this month, encouraging young Muslims to add their voice to the fight against Islamic State. The hashtag spread fast, and the #notinmyname video was viewed over 260,000 times.

However, it also spawned a satirical response in the form of #MuslimApologies – a reaction to the idea that Muslims were somehow responsible for the actions of extremists. It was used to share ‘sorrynotsorry’-style mock apologies for inventions and advances by Muslims, such as @AnaziNasser’s ‘Sorry for Algebra,’ beneath a photo of mathematician Muhammad ibn Musa al-Khwarizmi, as well as frustration at generalised blame. ‘Don’t expect me to apologize for ISIS. I actually deserve an apology for your narrow-minded stereotype of me,’ tweeted @yafavoritearab.

This weekend saw enormous protests in Hong Kong, over Beijing’s decision to limit democratic reform in the region. Thousands gathered outside government headquarters as part of the Occupy Central movement, which has also been dubbed the ‘Umbrella Revolution’ after protestors used creative means to protect themselves from the pepper spray being used by police.

Ah, how Twitter loves a gate. Hot on the heels of #bingate, #bonogate and #pyjamagate comes #bendgate, a veritable treat for hipster-haters and Apple detractors alike. When a colossal nine people complained to Apple that their new iPhone 6 Plus had bent after carrying it round in their pocket, the phone giants responded by claiming that users were simply using it wrong – and fingers were immediately pointed at another modern icon: skinny jeans.

All evidence suggests that the new iPhones are actually no more bendy than their competitors, but that didn’t stop a wave of hilarious responses from equally ‘agile’ brands such as Pringles, Heineken and KitKat. A hoax or a big ol’ design flaw? We’re in limbo. 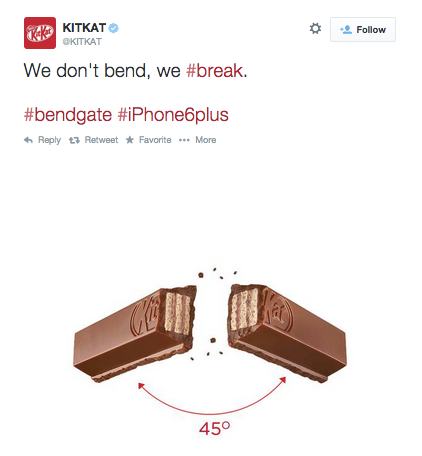 What’s this, another fashion week? Could it be that Preston, Lancashire is finally to be recognised for all its sartorial efforts? Ah no – it’s Paris. The final of the big four, Paris Fashion Week has brought with it endless Instagrammed macarons (apparently sugar is still du jour), Jean Paul Gaultier’s final bow, Kim K and North West in matching black chiffon Givenchy, and Stella McCartney endorsements for both utility denim and going out in your jammies.

Blanket coats and chunky knitwear reigned supreme among the street style bloggers, despite it being a sunny 22 degrees outside. Vive la sweat!

Sales of doughnuts are reported to have risen by as much as 50 per cent after Wednesday’s quarter final episode of the Great British Bake Off – but they’re not the only nuts making headlines, as its was revealed viewers have been complaining about the show’s penchant for ‘smutty’ innuendo.

The BBC haven’t helped matters with their #BakeOffInnuendo of the Week tweets, while ‘Suephemism’ Perkins (a portmanteau that’s going to get to catch on if it kills me) laughed off the notion that her nudge-nudge-wink-wink commentary, including gems like telling the bakers to ‘pop Mary’s cherry…in the oven and bring it out again’, was ruining the programme. Which is just as well, because this week we’ve got a semi to contend with. 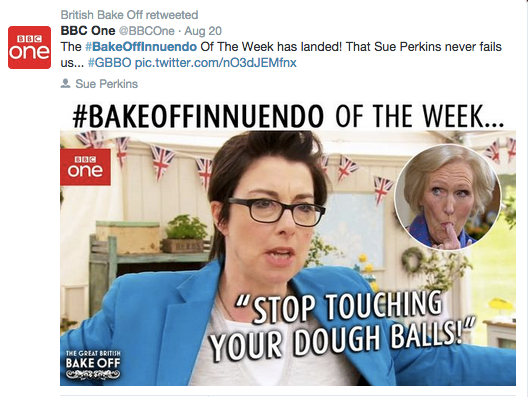 As publicity for Not That Kind of Girl – the book she’s written that seems to have been coming out forever but still hasn’t quite come out yet – Lena Dunham has turned agony aunt in a series of YouTube videos. Promising to ‘help you with some of your problems using my limited knowledge from my most terrible escapades,’ she’s tackled letters from fans on topics as wide as bullying, jealousy, bad sex and people telling you you’re too loud.

In typical Lena fashion, the videos are as funny as they are sincere – also featuring a fluffy dog and a pretty kickin’ outfit. They’ll make you want to re-watch all of Girls, and probably buy the book too (it’s out in the UK on 9 October).