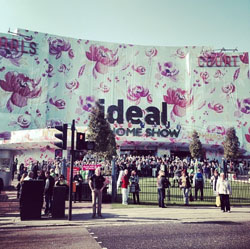 This week the Shiny Shiny team were invited along to the Ideal Home Show at Earl’s Court Exhibition Centre in London.

After hours getting lost in the maze of smart tech products, treehouses that looked like huge spiders and a sickeningly pink health and beauty section, we’ve managed to pick out just five things we learnt during the show.

Unlike big tech events there were no huge launches to shout about, but plenty of gadgets, exhibitions and accessories dedicated to making your life just a little bit easier.

1. Virgin Media wants to be the key to the connected home

Virgin Media put on a flashy show detailing all of the new products hitting the market that will bring us the smartest most connected homes imaginable. Of course the whole point was to prove how great Virgin’s high speed broadband is, but that didn’t stop us from being introduced to Jamie Oliver’s HomeCooker that stirs itself and the team at WiFi Plug…

2. The WiFi Plug is a smart, simple and cheap way to control your home from your phone

As part of the Virgin Media demonstrator’s performance about the connected home, the WiFi Plug played a key role because it’s just such a simple but smart way of controlling what goes on inside your house. Simply purchase a WiFi Plug (or a dozen of them for even more control) and you can then decide when to turn it on and off remotely via a dedicated app and easy-to-use labelling system.

It sounds really basic but there are so many possibilities – controlling a fan from your bed, turning off the kid’s TV after an hour, switching on a lamp at home while you’re on holiday for a few hours to deter burglars… The list really is endless.

3. Tree houses are still really cool – even after you’ve grown up 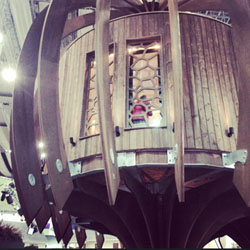 If you visit the Ideal Home Show this year you’ll see that The Quiet Treehouse is the star, towering above all over the exhibitors like some kind of giant, friendly spider. It’s a pretty impressive structure in itself, but inside there’s lots going on too. The treehouse has been made by a partnership between Quiet Mark and John Lewis to evolve our understanding of sound quality and development.

Sounds cryptic, right? Well Quiet Mark is a not-for-profit that aims to make the world a quieter, calmer place by reducing the noise of household tools and appliances and giving its universal symbol of approval for manufacturers who play by its quiet rules. John Lewis is getting involved because Quiet Mark will be deeming loads of the department store’s electrical products as “ear-friendly” or something more technical.

The Quiet Treehouse itself was built specially to keep out the noise of the really busy trade show and achieved that in style, as the interior was kitted out with John Lewis furnishing and a tonne of amazing tech products.

4. Bose is still the boss when it comes to sound 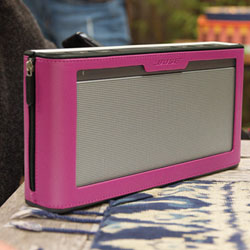 Seasoned Shiny Shiny readers may remember our encounter with the awesome Bose SoundLink Mobile Speaker back in 2011. Since then, the audio specialists have launched the SoundLink Bluetooth Speaker III, an audio device that seamlessly pairs up with your phone via Bluetooth and lasts up to 14 hours on a single charge. We put the speaker to the test with the guys at Bose and were (kinda literally) blown away by the depth and clarity of the sound.

5. When your phone runs out of juice it really isn’t the end of the world

Admittedly more of a gadget for on-the-go than in the home, Ye!!’s Energy Pocket has been around for a few months now. However, it’s still a winner for fast recharging on-the-move as it’s super light and pocket-friendly at 87g, packs enough power to charge your phone 1.5 times, and looks bright and colourful while it’s at it.