They say that life is a game, and every day that feels more true. No longer are high scores and levelling up simply the domain of Playstation, but “gamifying” everyday tasks has become the measure of a person. You can no longer go for a run without your Nike+ wristband judging you on your progress, and even going for a nightout has become all about who is the “mayor” of a place, thanks to Foursquare. The latest technology to join this trend gamifies… umm… your shower. It’s sort-of a last.fm for the bathroom. Seriously. 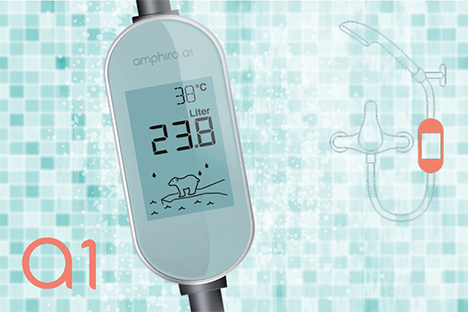 The Amphiro a1 is the result of a crowdfunding campaign and is device that plugs into your showerhead to monitor your water usage – and you can use the accompanying website to get an analytical breakdown and a grade on how well you did at saving the planet (!).

Plugging the Amphiro into your shower is a piece of cake – and I say that as someone who is essentially completely hopeless at all manual and DIY tasks. The device sites between the shower head and the tube linking it to the taps. This means that it should work on anything – even those ultra-fancy power showers.

It’s just a case of unscrewing it, and screwing the a1 in between – making sure the small sieves stay facing the right way round. Easy.

So you’re in the shower, and a few seconds after turning on the taps you’ll notice that the screen on the Amphiro starts to display some numbers – it’ll count how much water you’re using and will display it in real time. It’s not a screen – more akin to a giant watch face.

Along the top is a letter rating derived from both the water usage and the average water temperature – like the rating scale on your washing machine, it goes from A to G, and even has positives and negatives.

After you’ve finished, the display will begin to cycle between your grade and water usage stats and the combination of code and number you can enter into the Amphiro website to log your shower.

So head over to the Amphiro Portal, enter your code into your account and it’ll give you your own analytical breakdown: 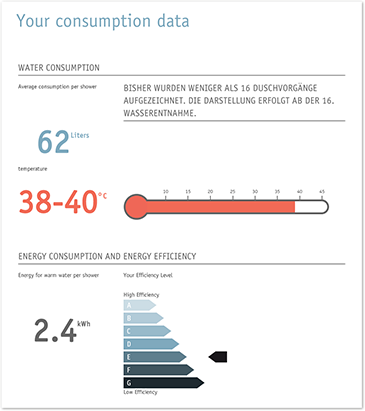 I know what you’re thinking – an “E” grade isn’t very good, but hey, I need all that time in the shower. Where else am I going to win arguments in my head over disputes that happened years ago?

Sadly the analytics side of things needs a bit of work. As you’ll see from the screenshot – though I know that I used 62 litres of water, there’s a big chunk of German text next to it. And even though I’m trying my best on language learning site Duolingo (another Gamified service), I’ve still no idea what that means. To be fair to Amphiro – this is a German product, so I imagine English localisation is something they’ll be getting around to soon.

Similarly, though I can go through a view a log of previous showers (this doesn’t get any less weird to describe), there’s no comparative analytics. So I can’t view graphs of water usage over time, or anything like that. And yes – this time last week I had no idea that comparative shower analytics was something that I needed in my life either, yet here I am yearning to track my progress.

Still – all of this can be fixed by the time the Amphiro launches properly on these shores. Another huge improvement would be a mobile app to enter codes – as otherwise it’s a race against time to dash to your computer and enter the code before you forget it. (The Amphiro only displays the code for around 3 minutes after a shower as the unit is powered by water sloshing through it). According to the company – this is currently being worked on but isn’t ready yet.

Similarly, you can easily imagine a future version having embedded wifi or bluetooth – enabling the seamless transmission of your data to the cloud, with no need for human intervention.

So is it worth taking the plunge? Will the Amphiro make a splash? Or will it sink without a trace? Will it rain on your over-consuming parade? Or is it only for people spending money like water?

The A1 currently retails for €59.90 – or around fifty quid, which feels rather steep for a device that isn’t hugely smart in and of itself. Though as the company grows and increases production, you’d expect the price to come down as they achieve economies of scale.

Similarly, I’m not sure the technology is quite there yet. As I mention above, the website needs some significant improvements (and this is comparably easier to do), but I’m left wondering if a smarter internet-connected device might be just around the corner.

This said – it is hugely interesting to see how much water you’re wasting, and is certainly behaviour shaping. Even in the short time I’ve used the A1, I’ve started to be more conscious of just how high I crank the hot tap, and how long I spend pondering the universe’s biggest questions rather than washing my damn hair.

After a couple of F minus ratings, you’ll be starting to despair at how you’re killing the planet, and will be starting to wonder if you really need to shower every day. So blame Amphiro if the world starts getting a whole lot stinkier.

One thought on “Amphiro a1 Review – turn showering into an environmental game (!)”