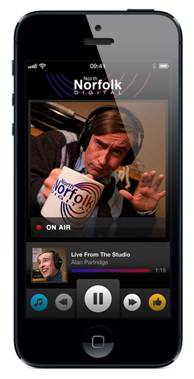 Aha, you can’t move for Alan blinking Partridge at the moment what with his new film Alpha Papa hitting the cinemas today.

The legend that is North Norfolk Digital’s finest broadcaster is also eying up your iPhone too. For launched today is the the official Alan Partridge app, Radio Alan: The Alan Partridge Player which is available to buy on iTunes for £0.99.

The app is designed to help you create the chap’s unique early morning broadcasts and features audio clips of Alan talking ‘live’ on-air from “Mid-Morning Matters.”

The clever bit is that the clips are then followed by songs from your own iTunes library. So for example Alan might say “Keep your clubs away from his young, it’s Seal!” and then app will recognise if you have a Seal track in your iTunes library and play that song next.

Always an arbiter of good taste the app also has a ‘Rate My Tunes’ option, whereby Alan rates your iTunes library. If he likes your taste in music you may get a “Back of the Net!” rating that you can share with your friends on Facebook.

There are also in app purchases including the Partridge playlist which retails for £0.99.