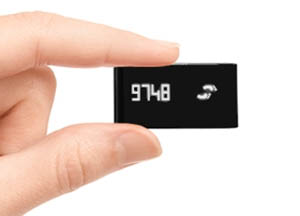 Our sister site Connected Health has been poised for a whole load of exciting health and fitness tech announcements from CES 2013 this year and even though the show hasn’t officially kicked off for the public yet, the specialists at Withings have revealed a Smart Activity Tracker to add to its ecosystem of its other apps and devices.

The compact little gadget is set to directly compete with the likes of the Fitbit One, Nike+ Fuelband and Basis offerings, as it’s packing tech to track a number of performance-based metrics, like a sleep monitor and pedometer, as well as being able to read your pulse too – a feature a lot of the other gadgets on the market aren’t capable of doing quite yet.

The device is tiny at 8.3mm thick and a length of 43.3mm, which means you’ll be able to attach it to a belt loop or throw it into your pocket.

It’s also rechargeable via a micro-USB port and can be connected via bluetooth straight to your phone, enabling users to power up the dedicated Withings app and get a more detailed look at their daily stats.

“Understanding how to analyse your fitness is the first step to improving it,

“The amount of technology that we’ve packed into this tiny sized and easy to use new-generation personal trainer will take us further into a new dimension of connected health and well-being where device, user and services are closely and permanently linked.”

We don’t have any official news about when the tracker will be available, but you can sign up for email updates depending on which country you live in over on the Withings website.