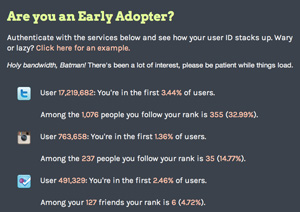 The term “early adopter” was first used by Everett Rogers in his Diffusion of Innovations theory to describe an adopter category of individuals who are often early customers of any given company or product or technology. However, it’s often used as a bit of an insult to take the mickey out of those who brag about being one of the first to try this product or one of the earliest to start using that.

Well now if you’re interested in learning just how early you really are when it comes to adopting new social networks (or really just Instagram, Google+ and Twitter), then a new site called idego.co tells you when you first signed up and where you stand in relation to the rest of your friends.

The Next Web says it seems a bit like navel gazing, and it is, but if you’re obsessed with being the earliest (you’re just so cool), want to see where you stand in relation to your mates or you’re just intrigued to see when you signed up, then give it a try.

Do bear in mind that you’re giving the app access to your social media profiles, so you may want to go and revoke access quickly after…