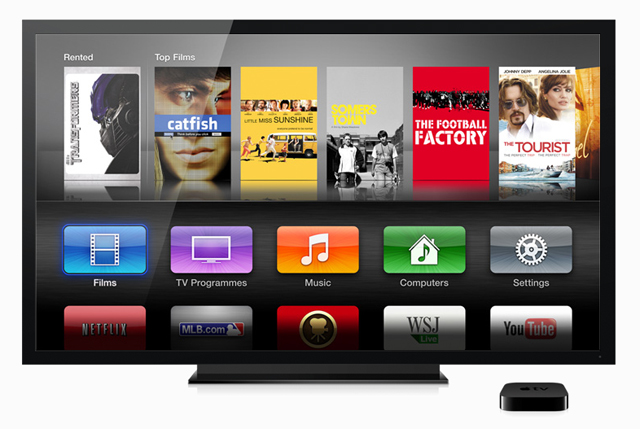 Although most people have been focusing on the news of the latest iPad device, Apple made a few other cool announcements at its big fancy event today in San Francisco, most notably the arrival of the new Apple TV.

The tech giant’s CEO, Tim Cook, confirmed that it’d be launching a successor to its 2010 Apple TV on March 16th, the very same day the new iPad 3 is set to hit stores, but it can already be pre-ordered RIGHT NOW.

But is it REALLY worth getting excited about this most recent version? Well, maybe.

Before today’s event there were a number of online rumours circulating that Apple was set to launch a TV of its own. Instead it’s upgraded its set-top box that streams movies and TV shows to your current device, and although that’s not a surprising move, it seems to have left some a little disappointed.

However, there are a few cool added features to Apple’s latest TV box, like a sleek and revamped interface with a more iOS look and feel, complete with large icons and much easier navigation than before.

The Apple TV will allow wireless mirroring, through Apple’s AirPlay, which means you can ‘mirror’ your computer screen, iPhone or iPad to your TV wirelessly.

The new version also has iCloud, so you can view content that you’ve already saved to the cloud storage service and even view embarrassing photos on HUGE screens with the Photo Stream app.

But, the main USP of the new Apple TV is that it allows for full 1080p video support, as apposed to the 720p from the last version. You can also re-download things you’ve already purchased in 1080p too, which is pretty cool.

Although there are a few key features added to the latest reincarnation of the Apple TV, its price is staying the same at $99 in the US and around £120 here in the UK, which is pretty reasonable. A ‘proper’ Apple TV is still on the cards for the next year, but for the price this latest set-top device is worth it, particularly if you’re up for taking advantage of the mirroring and iCloud services.