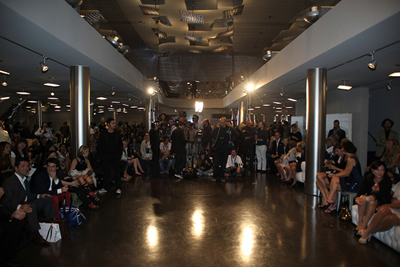 During London Fashion Week last September, UK-based fashion house Burberry debuted its new collection to fans on Twitter before industry insiders at the actual show got a peek, in what was dubbed the world’s first ‘Tweetwalk’.

Well according to Mashable, a number of key players in the fashion world are looking to take a leaf out of Burberry’s book at New York Fashion Week, which officially kicked off today.

A number of fashion houses are keen to take advantage of their huge online following and share more content with their social networks than ever before. Tommy Hilfiger will be holding a ‘Twitter Model Walk’ of its men’s Autumn/Winter shoe collection, Rebecca Minkoff will be debuting her designs on Twitter 30 minutes before her models appear on the runway and Diane von Furstenberg has interestingly teamed up with iPhone app Viddy to shoot short video clips of her collection, which will go live on both Twitter and Facebook before the show.

It’s great to see such popular and prestigious names from the world of fashion share their collections with online fans in this way, in some cases long before those actually attending the show get a look in. Not only does it make the (sometimes) intimidating world of fashion more accessible to non-industry insiders, but it also points to an increasingly popular trend focused on sharing content and live-streaming events solely to a Twitter-centric audience.