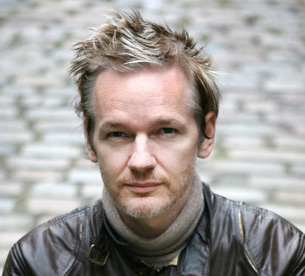 The sliver-quiffed leader of Wikileaks Julian Assange is auctioning off a lunch date with himself in a bid to raise money for his whistle-blowing website. Oh and the famed philosopher Slavoj Zizek will be there too. Currently the bid stands at £1,850.00 and you have 4 days left to get in there.

We call him the “sexiest” hacker, but it might be more accurate to say “rapiest”, or probably just best-known. Most hackers are anonymous by default. Though we’d love to get to know the people behind the Sony hack. (Get in touch if you want lunch guys.)

Back to Julian. Jezebel remind us of his stated preferences if you’re interested in more than his job:

“His OKCupid profile advertised a “passionate, and often pig headed activist intellectual” who “seeks siren for love affair, children and occasional criminal conspiracy.” He also likes “women from countries that have sustained political turmoil. Western culture seems to forge women that are valueless and inane. OK. Not only women!””