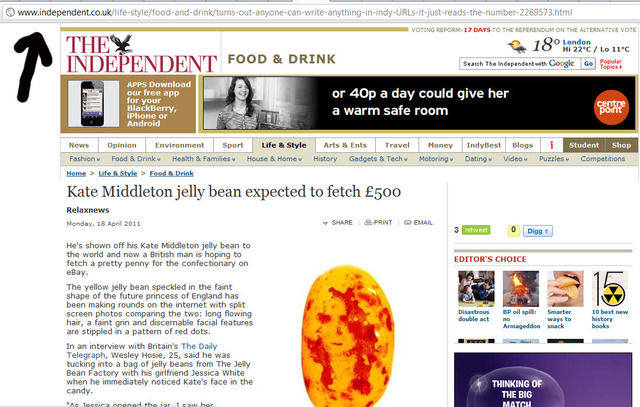 Some fun today on Twitter as a seemingly rude URL described a story on the Independent newspaper’s website about a jellybean that looked like Kate Middleton:

Originally attributed to a bored sub at the Independent, it quickly transpired that a chap on Twitter, a certain Toby Manhire @toby_etc had simply gone in and tweaked it, as any reader can do.

Turns out it’s an old URL cheat where you can change certain bits of the address without changing the page that it directs to. In the Independent’s case, it’s the story number that has to stay the same, the string of words can change to a variety of things:

It seems to depend on what server you’re on as to what parts of the url it reads to deliver the page needed. Many pages can have their urls tweaked like this: The Sun for example, or, err us.

While many could see it as a hack leaving you open to practical jokes – it can have positive features too: Jack Riley of the Independent explained why it was useful on Twitter –
“In case a user misspells a headline, or we change the headline as a story develops”