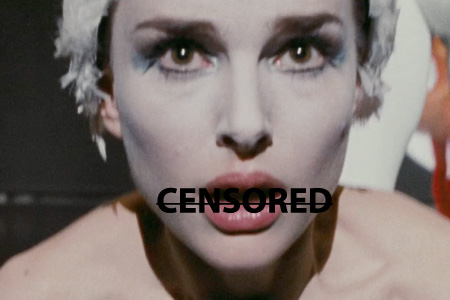 In the movie Black Swan, Natalie Portman never expresses a desire to tweet or facebook her feelings about the ballet company she works for. But if she did, she probably wouldn’t be able to…

A New York Ballet Company has just told its dancers that it wants to directly control what they do on social media sites. It will write the Company’s control over employee’s social media into the job contracts they have to sign.

That means that tweeting about the New York City Ballet would be a breach of contract that could see Ballet employees fired.

Okay so this sort of thing happens in the corporate world too – though it’s not often formalised into job contracts. This is a harsh measure for any company – but it seems particularly heavy-handed coming from the arts world and into a publically-sponsored company. It inspired a rant on ReadWriteWeb about how the institutionalization of the arts is damaging to creativity.

I can just imagine this happening in an updated version of Black Swan, it’s all about that scary control thing.

It was sparked by the sarky remarks of one dancer – 24 year old Devin Alberda – about his boss’s drink driving charge and his other irreverent comments about the world of New York cultural institutions.. 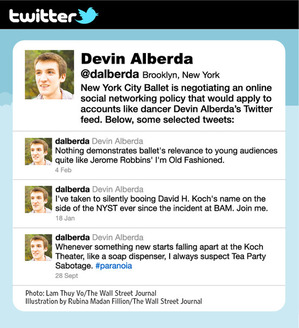 While tweets and uncontrolled social media may embarrass management – having a draconian Big Brother crackdown can be counter-productive too. Positive or even just informative tweets about your company can be a good way to reach a new audience. Maybe a young audience – the sort that ballet companies are keen to get involved with.