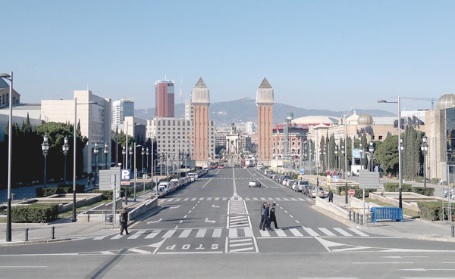 Five things Mobile World Congress has taught us about what’s going to be big in 2011.

ONE: Tablets
You may have heard about these before – but It looks like some of them are finally emerging from the shadow of Apple’s iPad and starting to make a mark. Android ones lead the pack largely running Honeycomb, Googles new made-for-tablets operating system.
key gadgets: HTC Flyer, LG Optimus Pad, LG G-Slate

TWO: The future is in 3 dimensions
I know. I know that the real world is in three dimensions: we’re talking about screens. Screens will be in 3D, pictures will pop off your phones, videos of Avatar will have that three dimensional thing going on. Hell, the camera will probably record in 3D too..
key gadget: LG Optimus 3D

THREE: Near Field Communication (NFC) Chips
You’ll be hearing a lot more about these. Born from a fusion of Radio Frequency Identification Chips (RFIDs) and wireless technology, these chips lets your phone communicate with your car.
key gadget: the concept car produced by Continental, the automotive supplier; and NXP the chip makers

FOUR: The Facebook Phone was real, but not that exciting
HTC whipped out a couple of *Facebook phones* named The Salsa and ChaCha. Though from the looks of things, they aren’t really more than regular Andorid smartphones with Facebook content forefronted in the user interface. Interesting idea though. Are social giants Facebook interested in advancing more in this space?
key gadgets: HTC Salsa and HTC ChaCha

FIVE: Software
Ever since Apple launched the app store, it’s been clear that software is where it’s at, but that became clearer than ever this year. Operating Systems are now a big selling point for any mobile device (Android Honeycomb!/ Windows 7!) The big story of Nokia’s deal with Microsoft was all about software – the giant phone makers will start to make Windows 7 devices, ditching the blippy Symbian software that has not been able to compete with Apple or Google.
key gadget: the Nokia Windows 7 phone