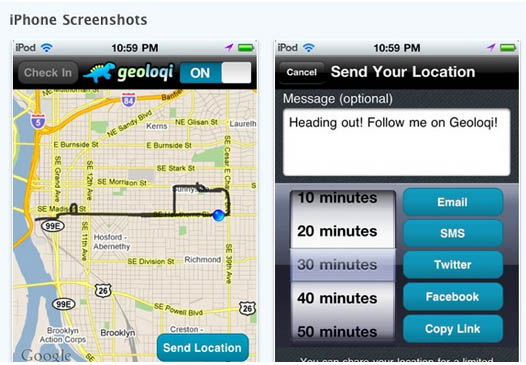 An app that lets your friends see and track your location was always going to get made, but Geoloqi have made this idea seem useful and sociable instead of like some Big Brother nightmare of the Daily Mail.

With an open API and a really smart user experience, this looks like it could be the app that finally persuades people to share and track their location online.

Why it’s different to Foursquare and Facebook Places
Location sharing has been around for a couple of years- Foursquare, Gowalla, and could be on the brink of going mainstream with Facebook Places and the new corporate Deals they have stitched up (see more here).

Geoloqi just extends the functionality a bit – instead of checking in at a single place, you can track yourself real time. So say you set the app to track your location for 30 minutes and you email the link to your friend, she can see your path updating as you move around, to within an accuracy of 1m. It leaves a little black line on the screen marking where you have been.

And instead of only other people on your network being able to see you (for example, only Facebook friends can see where you check in on Facebook Places)… pretty much anyone you want to can see your location, because the link to the map where you are can be emailled, texted or shared with Facebook and Twitter.

Oh yes – and there are apps for almost all platforms: Blackberry, iPhone, Android and Nokia.

It can also automate some phone tasks according to your location – ie sending a text message to your friends when you’re half a mile away from your meet-up spot.

Safety precautions
There are safety measures: the links for tracking people expire after a set amount of time – with the default being 10 minutes so that you can chose how long your movements are visible for.

Three occasions when Geoloqi could be useful

1) When it’s your birthday party, you’re moving between venues and you want your friends to be able to find where you are without each of them having to ring you. Post your location on Facebook for an hour so that people can find you.

2) If you’re leading a march or protest and the route is variable but you want your supporters to be able to find you wherever you are… turn on tracking, give the phone to the leader of the march and post it on Twitter so your followers can work out where you are.

3) If you go for a run, or a wander and want to track how far you’ve gone and what your movements have been afterwards – set the tracker to run for an hour and email yourself the link, when you get back, you’ll be able to see it on the app.