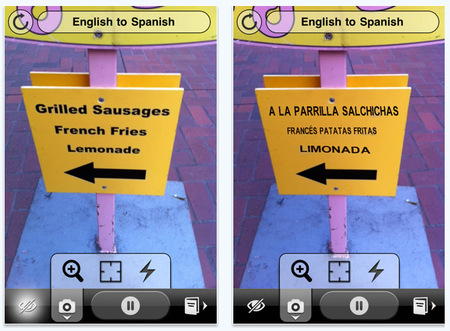 Uh, wow. Appmakers Questvisual have invented an app – on sale now – which can translate words within in images, in real time. That means that you can point your phone at a poster or page in Spanish and it will translate it into English as you look at it.

It even keeps the translated text in roughly the same size and font and uses AR to superimpose them on the image so it literally looks someone has magicked a translated rewrite out of thin air.

It’s exactly the sort of app that people always imagine would be great, but that seems impossible to make. But, taking advantage of the quality of image recognition now available and putting in two and a half years of hard work the creators – Otavio Good and John DeWeese- have produced this excellent app. I’m stunned. It even magically leaves numbers unchanged. And even better, it works with the internet off, so you won’t need to burn through ££s of data on your travels abroad..

This is going to work better with printed words, rather than handwritten ones, and probably with big ones rather than small ones. Good says that it doesn’t accurately translate everything… but still this a fantastic app and really user-friendly. Currently it only does English to Spanish and vice versa but they’re looking to include more languages in the next update. Check out the neat reverse type demo too..

This is possibly the most useful application of AR that I have ever seen.

One thought on “Word Lens – is this translator the most useful AR app ever?”