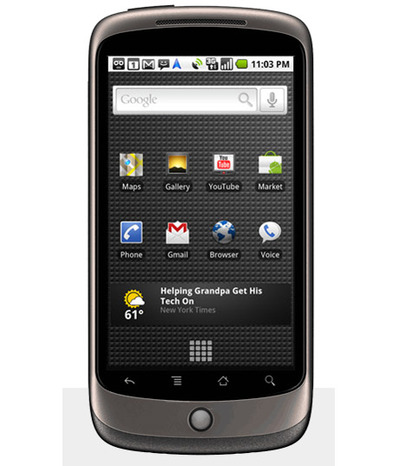 Rated as one of the best phones on the market, second only to iPhone according to some, the Google Phone, the own-brand Nexus One has been officially discontinued in the US. It’s still available to buy, but Google have put in their last order to HTC, so the phone will only be available while only while stocks last. Err, and will actually be available in Europe indefinitely.

It was a critical success but a commercial failure with only 135,000 units sold in the time it took Apple to sell 1million iPhones.

2) Only sold online. People like to hold things in their hands before they buy them, especially if it’s a big purchase. And they like to have deals stitched up for them.

3) No advertising. Of course if you google it, it’s top result.. but look at the effort Apple spends on adverts on TV, in papers, plastered all over stations. Phones are prestige items. If no-one’s heard of your handset, it’s a factor against buying one. Sure maybe Apple ODs on the hype and cult-like press conferences, but hell at least everybody has heard of them.

Even a partnership with Vodafone didn’t seem to rescue the fortunes of the phone. Still seeing as the discontinued bit won’t kick in for a few months at least – if you want an Android handset, this is one of the best ones going.

Buy the Nexus One here