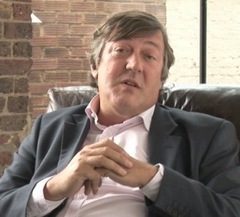 So in what is admittedly a rather silly competition, Stephen Fry has chosen one tweet as The Most Beautiful Tweet in a contest sponsored by the Hay Festival.

That tweet of resounding beauty? It was by a Canadian called Marc McKenzie and it went:

“I believe we can build a better world! Of course, it’ll take a whole lot of rock, water & dirt. Also, not sure where to put it.”

Now, I don’t know about you, but that to me that is more of a witty but slightly pessimistic take on the noble human aim of trying to change the world rather than 140 characters of resounding beauty. More lols than lovely.

But then this Mr MacKenzie is obviously a tweeter of accomplishments, he has previously been short-listed in a national competition in Canada for the best tweet. (There’s a country that appreciates Twitter.)