Face Time used to be time you spent in the presence of someone else’s face, but from now on, people of the world, it will mean time spent using a particular functionality on the slim glossy-screened iPhone 4.

It’s the Skype-style video call bit, the sexy final feature that Steve Jobs booted up as the piece de resistance at the end of his presentation yesterday. Ever humble, he stated it will change the way we all communicate, forever. 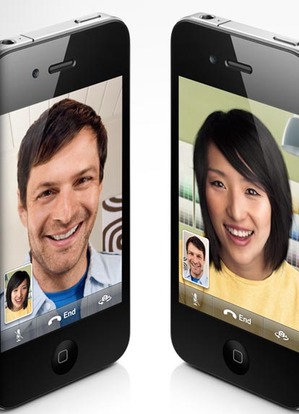 But will we use it iPhoners? Will we?! Facetime will only work from iPhone 4 to iPhone 4, cutting out about 80% of your friends. And it only works on wifi, not the general 3g network, so you’ll have to be at home or in the office to get it to function.

Fans say:
– Wow! I can see my friend’s face
– The ability to swap cameras so you can show someone what you’re looking at could be really useful, in describing or showing people something for example.
– Ooo isn’t the screen resolution good!
– Hey, this makes phones calls much more engaging and fun.

Cynics say:
– Jumpy wifi will crash calls
– If you have to use it at home anyway, because you need the wifi, you might as well just switch the computer on and do it over Skype on a big screen.
– Having to hold the camera still all the time and far enough away from your face to get a good picture will be a bit awkward and tiring (I forsee a new market in stands..)
– A lot of times you wouldn’t actually want someone seeing your face- you’re still in your pyjamas, you’re walking about on the street and need to be able to see where you’re going…
– The name is silly

Will you use Facetime?