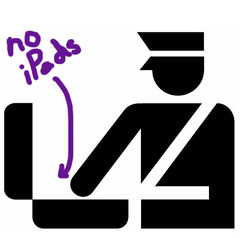 We know the Israelis have controversial borders so we can understand them being a bit sensitive over what they let through, but the Israeli border authorities have taken a surprising dislike to the iPad.

They have confiscated 10 iPads after Israelis brought them back after trips to the States. The iPads were taken off their owners whether they were declared to Customs or not.

It’s not a state-wide stand against tablet computers or just that the Customs staff are PC guys. Apparently Communications Ministry engineers refused to pass the device because its WiFi operates to different standards than Israeli WiFi. Do they also confiscate American smartphones if their wifi standards are American? What’s the deal?

In a particularly cruel twist, Israeli customs authorities are actually charging the owners for each day that their iPads are stored in a government warehouse.

But silly though the fuss seems, it could still take a while to resolve, even though it’s not official policy:
“the government is refusing to say whether the iPads will be approved or how they will need to be altered to conform with Israeli law.” reported Israel’s

One thought on “Israel blocks the iPad: confiscates them at borders”