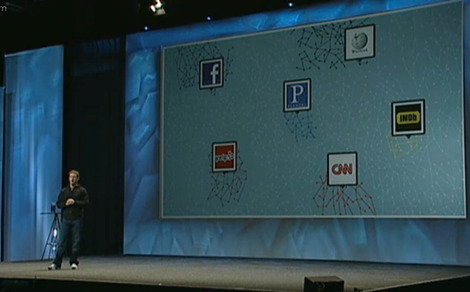 The big announcement at Facebook’s F8 conference on its future today was The Facebook Graph. So, what is this Graph? We explain quickly.

Okay so networks = graphs, so what? what’s the big deal?
Zuckerberg’s big idea is to integrate all the separate graphs into one graph powered by Facebook. So instead of having information about your friends in one place and about the restaurants that you like in another place, this integrates it all together..

It’s about bridging a divide that that looks like this: 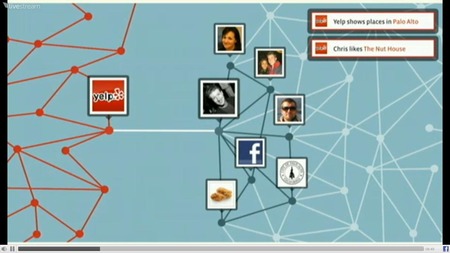 So a lot of information that’s currently walled off in different networks and sites will be brought together. And stored.

So this is a bit more than just an update to Facebook then?
Yes it basically involves the whole web. Facebook is wriggling its way into becoming the fabric of the internet.

TechCrunch are saying Facebook’s intentions are very clear: they want to be the fabric of the web: “Facebook’s stance is that social connections are going to be just as important going forward as hyperlinks have been for the web […]
And Mark Zuckerberg’s opening comments that the internet is currently organised around “unstructured links to webpages” and would be much better off organised by social connections state the same thing.

So are the big sites going to start introducing this?
Yup a lot of them are signed up to do it already, check out the logo table below of sites that currently use Facebook Connect and are likely to use Facebook Graph: 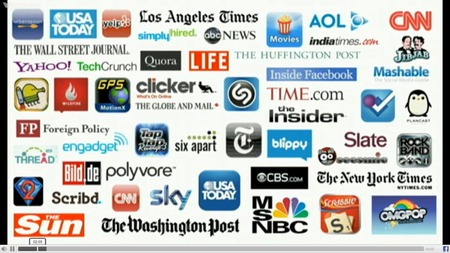 Can little sites use it too?
Yeah, the Graph developer tool kit is open to anybody, but for people who aren’t code-tinkering techies, Facebook have just created a layer of plug-ins for popular sites like WordPress which you can just drop into your site to ennable this functionality.

ZOMG. There’ll be privacy issues over this won’t there?
Oh yes, there will be.

One thought on “Facebook's Open Graph & Like Button: what you need to know”