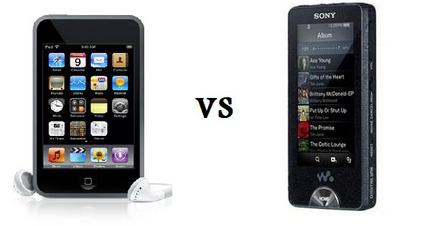 Way back in January we were uber excited about the news of a new addition to the Sony walkman family, the brand spanking X Series walkman. It was debuted at CES,
and we learnt all about how it combined useful wireless capabilities with a gorgeous looking 3 inch OLED screen. That dream has just become a reality as the X series is available to purchase from today.

But how does this lovely looking MP3 player match up to the likes of the iPod Touch, arguably its biggest competitor? Will the OLED screen be enough to position this player at the top of the tree, or will it be fisticuffs at dawn? Read on to find out….

Verdict: On size alone Apple leads this round, but the lure of the OLED make the verdict a draw.

Sony X series: The device utilizes an S master Digital Amplifier and has a dedicated digital noise cancelling button. It also comes with hi quality headphones that work as a FM tuner. You also get a connector that can be used to adapt to a planes AV system.
iPod Touch: You get the infamous annoying iPod headphones with average sound quality

The verdict: Sony wins by a mile.

Sony X Series: There’s a special YouTube button, and there’s Wi-fi connectivity for easy streaming and downloading,.
iPod Touch: You can easily download tracks and steam videos on this device, and there’s the added bonus of being able to update the device with applications.

Verdict: the iPod Touch wins, based on the might of the Apple Application store.

Verdict: Apple wins on the variety of formats they support, but it’s still early days for the X series.

Verdict: I like the fact that Apple offer 8GB as well, but on price Sony wins.

Sony X Series: Gorgeous to look at, lovely to play with, and incredibly streamlined.
iPod Touch: If there’s one thing Apple do well it’s style, and the Touch is a must for all music fans.

Verdict: It’s a draw- both devices are equally stylish.

It’s pretty neck and neck on the specification front, so either device should make you smile more than the Jonas Brothers in concert. I’m quite swayed by the lure of the Apple application store, but the OLED display and noise cancelling technology make the X series really superb.