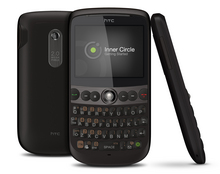 HTC has been out of the mobile game for a while preferring to let the likes of the Pre and the G1battle it out for smartphone domination, but it’s back with a bang, with the launch of the new HTC Snap.

This mobile is all about managing your connectivity, so as well as the usual push email, Bluetooth and High-speed 3G HSPA WAP, they’ve integrated a feature called Inner Circle. This lets you highlight emails from important people and bring them to the top of your (probably overflowing) inbox, with ONE button.

It clocks in at a slim 12mm thick and provides up to 8 hours of talk time. Sadly the device runs off Windows Mobile 6.1 and there’s still no word as to what network this will be on. Rumour has it that the UK will get it on T-Mobile though, but we’ll have to wait to see if that can be confirmed.

The device features a QWERTY keyboard with extra large keys with tactile feedback to simplify the experience, and has a Blackberry-esque feel to the design.

We’re told that the US is going to get an unlocked version of the phone that supports HSDPA in the summer, entitled the HTC S721, which is frustrating for us UK folk.

The camera is meant to be a paltry 2 megapixel as well, which is a shame as had they bundled in something higher spec, it would look like a pretty attractive proposition.