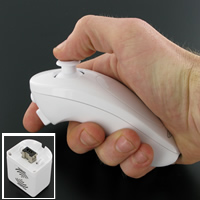 Wired peripherals do tend to fall on the rather annoying side of things, don’t they? Throw tangled wirage, perhaps the odd wire-related buckle and unattractive wire-ymess into the equation and wired gadgets/peripherals/whatever are right up there with cash points with £20s instead of £10s, people talking loudly on their mobiles on public transport or standing in unnecessarily long queues – i.e. they’re frickin’ annoying.

An LED status indicator is on hand to tell you when you’re connected and you won’t need to purchase any batteries as it comes bundled with a rechargeable lithium ion battery.