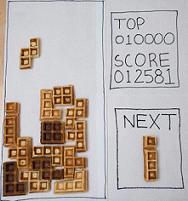 Exposure to terrifying or highly stressful events can be really traumatic. If you’re feeling the strains of post-traumatic stress, perhaps a bit of Tetris will make it all better. Yep, you read correctly – Tetris could be your cure. Apparently… well according to that ambiguous bunch of people, otherwise known as scientists (from Oxford University), Tetris could be the healing treatment you need to get over a traumatising ordeal. How? That’s exactly what I want to know.

Well, the kind-of addictive puzzle game apparently has medical value by using it as a “cognitive vaccine” against flashbacks and traumatic events that are likely to scar you for life.

The underlying principle behind their findings are after the jump…

Of course, tests were done, which of course found out groups exposed to traumatic material followed by ten minutes of Tetris game play, had significantly fewer flashbacks.

My only question to them, is that after a terrifying ordeal, such as, let’s say a plane crash – I can’t imagine Tetris being one of the significant agendas on their minds, can you?

If anyone is in a position to put this theory to the test, *please* let us know how you got on. So if my friends still insist on sending me gruesome car crash images and the like, I’ll know the prevention method to use to prevent the images plaguing my mind.